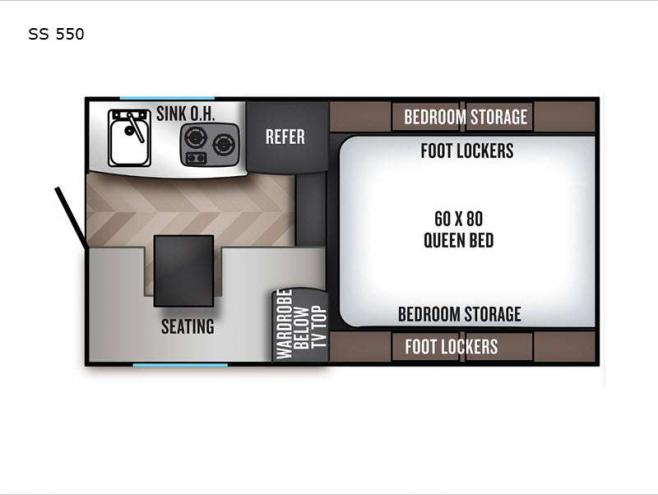 If you have a 1/2 ton truck with a 5' or larger bed then you can take this truck camper on your next camping trip! The front queen bed welcomes you to a good night's rest, and you can store all of your clothes/shoes with the bedroom storage and foot lockers on either side of it. There is even a wardrobe below a TV top too. Grab some eggs and bacon from the refrigerator to fry up on the two burner cooktop then head to the U-shaped seating area to enjoy them there comfortably!

Each one of these Palomino Backpack Edition truck campers are ready for whatever adventure you throw their way! The high density block foam insulation will keep the cold out during those cooler months. They are also constructed with an Alpha super flex membrane roof, a plywood substrate, and come in either a white fiberglass exterior or a grey gel coat exterior. A few commonly ordered options you can add include air conditioning to cool you off on a hot summer day, a solar panel to keep you charged wherever you go, and electric jacks to make life easier. Some models even have the option to add the optional Badlands package. Come choose the model that best suits you today!

ManuFacts
Palomino Camping Trailer construction began in 1968 with the dream of Mr. Vern Landey. Mr. Landey had been a tent trailer distributor for several years when he felt he could design and produce better quality units than were currently being offered to the public. He would design units which were lightweight and offered convenient floorplans at affordable prices. He began designing and producing Palomino pop-up tent trailers in a small building in Savage, Minnesota.

As demand for the Palomino grew, Mr. Landey felt it would benefit his company, Vanguard Ind., to relocate. With most manufacturers and industry suppliers located in the Elkhart, In. area the move eastward seemed logical. Vanguard Industries settled in the community of Colon in 1972. Once in Colon he began to put his plans in motion. By 1973 he had built the main production facility and within days Palomino tent trailers were rolling out the doors.

In 1976, Vanguard added its own Needle Division, in 1978 its own Metal Fabrication Plant, and has several cold storage facilities. On May 27, 1992, the primary production building and offices were destroyed by fire. By late August, 1992, the first 1993 model Palomino rolled of the line in the new 52,300 sq. ft. facility, which was built on the same site as the previous building had been.

The year 1998 continued to see expansion with the addition of a new 75,000 sq. ft. production facility, and another storage facility.  In 2002 Vanguard was purchased by Forest River, Inc. This allowed for rapid growth and the introduction of two new towable lines of travel trailers and fifth wheels, Puma and Sabre by Palomino.

In 2005, Forest River, Inc. and it's divisions were acquired by Berkshire Hathaway.  Palomino RV operates as a separate division of Forest River Inc., and has grown from humble beginnings in Minnesota to one of the top 5 RV manufacturing facilities in North America.

Vantastic Vans is not responsible for any misprints, typos, or errors found in our website pages. Any price listed excludes sales tax, registration tags, and delivery fees. Manufacturer pictures, specifications, and features may be used in place of actual units on our lot. Please contact us @505-268-5009 for availability as our inventory changes rapidly. All calculated payments are an estimate only and do not constitute a commitment that financing or a specific interest rate or term is available.
Our Guarantee Consign Your RV Customer Reviews
Vantastic Vans 525 Wyoming NE Albuquerque, NM 87123 505-268-5009
Copyright © 2023 Vantastic Vans • RV Dealer Website Design • Privacy Policy • Sold RVs